What Is Vintage Costume Jewelry 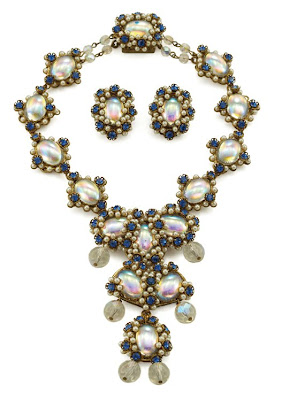 What Is Vintage Jewelry?

What is vintage jewelry and why do collectors love it so much.  Is it the art form or is it because the jewelry connects us to a deeper understanding of our past.  I propose that it is both and more.  Vintage costume jewelry for many, serves as a means of adornment to enhance our beauty or our  style.  It picks up our spirits and has us FEEL different about ourselves.  Vintage costume jewelry has a magical way of releasing endorphins that transform our spirits and can turn the "bitchiest" of moods  into one of bliss.  That feeling of transformation is magical.  It can be sweet and  ethereal or supremely powerful and bold.
Vintage costume jewelry almost always comes with a past.   A past that tells the history of society, of laws, of suffering, of love, of sacrifice and  of heartbreak.   It connects generations both present and gone. 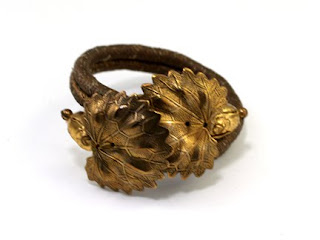 We can study the materials of a vintage piece of jewelry and directly correlate them to an era.  Many pieces of jewelry for example  were made differently due to the restrictions of priority metals during WWII and for a time thereafter.   Industries struggled and adapted to the laws of the time, which meant for some companies,  jewelry was not made of metal, but of cork, wood, and even macaroni. 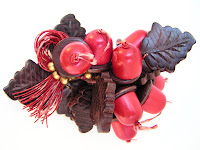 Vintage jewelry can be a feast for the eyes with zero practicality in being worn and be equally satisfying to own.  Many a collector has a closet full of vintage jewels never worn,  but merely adored.    Whatever  vintage jewelry means to you, however you care to define it,  it has been,  and always will be a fascination to study for generations of collectors to come.  We will always find joy in that little brass pin or that to die for couture Gripoix bib. 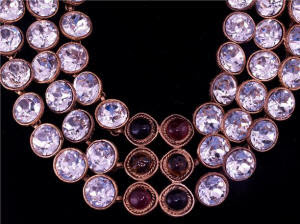 So let me leave you with this one last question…. Have you discovered your accessory expression?
Posted by The Jewelry Expert at 12:33 AM 5 comments:

New Brooches At The Jewelry Stylist 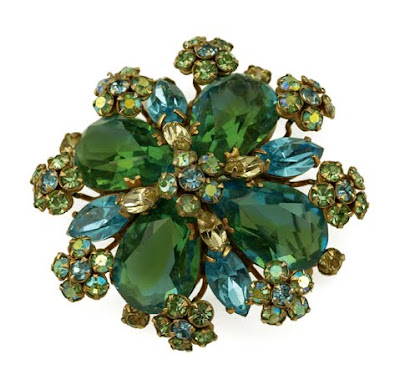 At the Jewelry stylist you can find an gallery of wonderful vintage brooches from YSL, Ciner, Schreiner, Trifari, Schiaparelli and others.
From whimsical to the intricate works of art, the brooch has consistently through time, found a place in fashion adornment. As a vintage accessory, brooches are a practical way to dress up any outfit with an endless array of practical uses and versatility.  This amazing piece of adornment can be worn on everything from a blouse, blazer, hat, and purse. 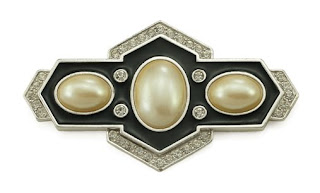 The Jewelry Stylist is pleased to present a wonderful gallery of couture vintage brooches for your wearing.
http://thejewelrystylist.com/gallery-brooches.htm
Posted by The Jewelry Expert at 10:18 PM No comments: 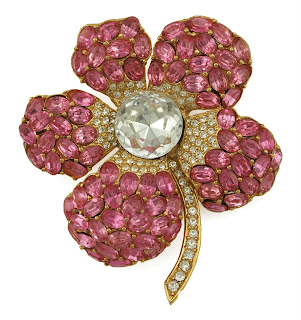 The Ciner Manufacturing Co. was founded in 1892 by Emanuel Ciner.   The company was initially known for the manufacture of fine jewelry.   Coveted by purveyors of fine quality gems the jewelry didn't go without notice, even to thieves.  According to the Chicago Times, in 1918, the Ciner Manufacturing  Company of New York was robbed of $9,000 in gems which were thankfully recovered due to the arrest of a female accomplice.
In 1931 the company began manufacturing high end costume jewelry following  the tradition of its previous product lines.
During the war, with many costume jewelry manufacturing businesses facing difficult times due to limited resources, Irving Ciner joined the forces of 50 manufacturing companies to form the New York Silver Manufacturers Association.  The mission of the New York Silver Manufacturers Association was to procure sterling silver for its members during wartime restrictions.    The group fought to change policy and awareness to ensure the stability of the local jewelry industry.
In 1946,  the Ciner Manufacturing Company began its first efforts to advertise on a National level, giving the company exposure through popular fashion magazines such as Vogue.
On February 8th, 1958 Emanuel Ciner died.  Incidentally exactly 2 years later to the day, James H. Napier of The Napier Co. died.  Each a figure head of a privately held jewelry concern, dating back to the late 19th century.
In 1978,  Pat Ciner Hill along with her husband, took over the family business and turned it into a multi-million dollar success.
In 2000 the company revisited some of the aspects of fine jewelry manufacturing and introduced a line made from semi-precious stones.
Today the company remains in business and will celebrate is 118 year later this Fall.  Vintage Ciner costume jewelry is highly collectible and coveted by collectors and lovers of fine fashion jewelry.
The Jewelry Stylist is proud to present this amazing Pink rhinestone flower brooch.
http://thejewelrystylist.com/c-signed-Ciner-BC2009083101.htm
IMPORTANT NOTICE:

The information provided by this website is for educational purposes only and is protected by U.S. Copyright Laws. It may not be reproduce whole or in part by means of photographic copy, digital reproduction, voice translation, recreation of content or any other means without the expressed written consent of Vintage Jewelry Collect or its owners.
Attention: Webmasters, Merchants and Ebay Sellers. It is not permissible to use said content for any commercial website, print, digital use, or online auction venue to augment or describe any item for financial gain or sale.

To obtain permission for educational purposes write: sales@vintagejewelrycollect.com
Posted by The Jewelry Expert at 1:04 AM No comments: