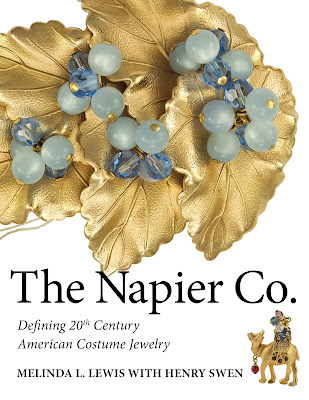 Melinda L Lewis along with former Meriden resident, Henry Swen, have just released the presale of their 1000+ page book titled, The Napier Co.: Defining 20th Century American Costume Jewelry. The book is the first in its genre to document decade by decade the history of The Napier Co. and tell the untold story of this great American Fashion Jewelry Manufacturer.

Lewis traveled around the country and interviewed over 50 former Napier employees from Meriden, Florida, New York, California, North Carolina, and Illinois to get an inside look of the company’s history, culture, and product. She was also assisted by the Meriden Journal, the Meriden library, and the Meriden Historical Society to garner data for her project from their archives. During her research, she collaborated almost daily for 8 years with former Napier salesman, Henry Swen, who Lewis later asked to be her co-author.

Lewis, a former licensed pharmacy technician, lost her ability to work due to chronic pain and migraines in 2001. However, shortly thereafter, as a vintage jewelry enthusiast, she became interested in Napier jewelry when she had an opportunity to purchase a number of Napier pieces. When her research turned up almost no in-depth history about the company, she began her own research deciding to focus her efforts on a book project and not her physical condition or work limitations. As Lewis states, “it gave her a sense of purpose turning something challenging into something good.”

The book was never intended to be over 1000 pages with 4000 images. However, according to Lewis, “I couldn’t tell the story properly in just 300 pages. It was done, when I felt it was done!”
Lewis is self-publishing and needs to presell 450 copies to print the book; a goal she has set to achieve by Dec. 31, 2012.

Lewis is a mother of two grown girls, and resides with her husband in California. She is also co-founder of Costume Jewelry Collectors Int’l (CJCI) an international jewelry club for jewelry historians, collectors, and dealers. You can join her on Facebook at http://www.facebook.com/thenapierbook or follow her on Twitter at https://twitter.com/thenapierbook or visit her site at http://www.TheNapierBook.com.
Posted by The Jewelry Expert at 4:49 PM 1 comment: